TRANSLATION : Mr. Paschoud and his collaborators, updated by
Mrs.C.Seidler.

UTILIZATION : Hunting dog above and below ground.

The Dachshund, also called Dackel or Teckel, has been known since the Middle Ages. From the « Bracken », dogs were constantly bred which were specially suitable for hunting below ground. From these short legged dogs, the Dachshund evolved and was recognised as one of the most versatile and useful breeds of hunting dogs. He also has excellent achievements above ground, hunting while giving tongue, searching and tracking wounded game. The oldest Club devoted to the breeding of Dachshunds is the « Deutsche Teckelklub » e.V., founded in 1888. For decades the Dachshund has been bred in three sizes (Teckel, Miniature Teckel and Rabbit Teckel) and in three different kinds of coat (Smooth-haired, Wire-haired and Long-haired).

GENERAL APPEARANCE : Low, short legged, elongated but compact build, very muscular with cheeky, challenging head carriage and alert facial expression. His general appearance is typical of his sex. In spite of his legs being short in relation to the long body, he is very mobile and lithe.

BEHAVIOUR /TEMPERAMENT : Friendly by nature, neither nervous nor aggressive, with even temperament. Passionate, persevering and fast hunting dog with an excellent nose.

HEAD : Elongated as seen from above and in profile. Tapering uniformly towards the nose leather yet not pointed. Superciliary ridges clearly defined. Nasal cartilage and bridge of nose, long and narrow.

FACIAL REGION :
Nose : Leather well developed.
Muzzle : Long, sufficiently broad and strong. Can be opened wide, split to level of eye.
Lips : Taut fitting, covering the lower jaw well.
Jaws/Teeth : Well developed upper and lower jaw. Scissor bite, even and closing firmly. Ideally, complete set of 42 teeth according to requirements for a dog’s mouth with strong Canines exactly fitting into each other.
Eyes : Medium size, oval, set well apart, with clear energetic yet friendly expression. Not piercing. Colour bright, dark reddish brown to blackish brown in all coat colours. Wall, fish or pearl eyes in dapple dogs are not desired but may be tolerated.
Ears : Set on high, not too far forward. Sufficiently long but not exaggerated. Rounded, not narrow, pointed or folded. Mobile with front edge lying close to cheek.

BODY :
Upper line : Blending harmoniously from neck to slightly sloping croup.
Withers : Pronounced.
Back : Behind the high withers, topline running from the thoracic vertebrae straight or slightly inclined to the rear. Firm and well muscled.
Loins : Strongly muscled. Sufficiently long.
Croup : Broad and sufficiently long. Slightly sloping.
Chest : Sternum well developed and so prominent that slight depressions appear on either side. The ribcage, seen from the front, is oval. Seen from above and the side, it is roomy, giving plenty of space for the heart and lung development. Ribs carried well back. With correct length and angulation of shoulder blade and upper arm, the front leg covers the lowest point of the sternal line in profile.
Underline and Belly : Slight tuck up.

TAIL : Not set on too high, carried in continuation of topline. A slight curve in the last third of the tail is permitted.

FOREQUARTERS :
General appearance : Strongly muscled, well angulated. Seen from front, clean front legs, standing straight with good strength of bone; feet pointing straight forward.
Shoulders : Pliant muscles. Long sloping shoulder blade, fitting close to chest.
Upper arm : Equal in length to shoulder blade, set almost at right angle to same. Strong boned and well muscled, close fitting to ribs but free in movement.
Elbows : Turning neither in nor out.
Forearm : Short, yet so long that the dog’s distance from the ground is about one third of its height at withers. As straight as possible.
Pastern joints : Slightly closer together than the shoulder joints.
Pastern : Seen from the side, should be neither steep nor noticeably inclined forward.
Front feet : Toes close together, well arched with strong, resistant, well cushioned pads and short strong nails. The fifth toe has no function but must not be removed.

GAIT / MOVEMENT : Movement should be ground covering, flowing and energetic, with far reaching front strides without much lift, and strong rear drive movement should produce slightly springy transmission to backline. Tail should be carried in harmonious continuation of backline, slightly sloping. Front and hindlegs have parallel movement. 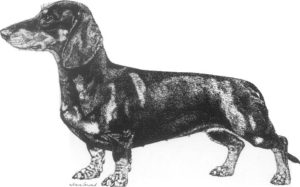 HAIR : Short, dense, shiny, smooth fitting, tight and harsh. Not showing any bald patches anywhere.
Tail : Fine, fully but not too profusely coated. Somewhat longer guard hair on underside is not a fault.

COLOUR :
a) Whole-coloured : Red, reddish yellow, yellow, all with or without interspersed black hairs. A clear colour is preferable and red is of greater value than reddish yellow or yellow. Even dogs with strongly interspersed black hairs are classed as whole-colour, not as other colours. White is not desired but single small spots do
not disqualify. Nose and nails black. reddish-brown is also permissible but not desirable.
b) Two-coloured : Deep black or brown, each with tan or yellow markings (« Brand ») over eyes, on sides of muzzle and of lower lip, on inner edge of leathers, on forechest, on inside and rear side of legs, also on the feet, round the vent and from there reaching to about one third or one-half of the underside of the tail. Nose and nails black in black dogs, brown in brown dogs. White is not desired but single small spots do not disqualify. Tan or yellow marking (« Brand ») too wide spread is undesirable.
c) Dappled (Tiger-brindle, brindle) : The basic colour is always the dark colour (black, red or grey). Desired are irregular grey or beige patches (large patches not desired). Neither the dark nor the light colour should be predominant. The colour of a brindle Dachshund is red or yellow with darker brindle. Nose and toenails are the same as with the whole- and two-coloured. 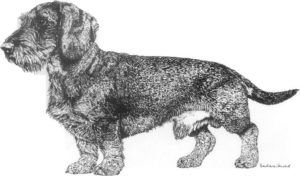 HAIR : With exception of muzzle, eyebrows and leathers, perfectly even close fitting, dense wiry topcoat with undercoat. The muzzle has a clearly defined beard. Eyebrows are bushy. On the leathers, the coat is shorter than on the body, almost smooth.
Tail : Well and evenly covered with close fitting coat. 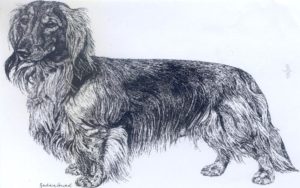 This illustration does not necessarily show the ideal example of the breed.

HAIR : The sleek shiny coat, with undercoat and close fitting to body, is longer at the throat and on underside of body. On leathers the hair must extend beyond the lower edge of ears (feathering). Distinct feathers on rear side of legs. Achieves its greatest length on underside of tail and there forms a veritable flag.

COLOUR : As described in Smooth-haired a-c.

FAULTS : Any departure from the foregoing points should be considered a fault and the seriousness with which the fault should be regarded should be in exact proportion to its degree and its effect upon the health and welfare of the dog.
• M3 (Molar 3) are not to be considered when judging. Lack of 2PM1 (Premolar 1) is not to be penalised. The absence of PM2 should be regarded as a fault, if other than M3, no other teeth are missing, also a departure from the correctly closing scissor bite.

SMOOTH -HAIRED DACHSHUND :
Coat too fine or thin. Bald patches on leathers (leather ear), other
bald areas. Coat much too coarse and much too profuse. Brush like tail. Tail partially or wholly hairless.  Black colour without any marking (« Brand »).

WIRE-HAIRED DACHSHUND :
Soft coat, whether long or short. Long coat, standing away from body in all directions. Curly or wavy coat. Soft coat on head. Flag on tail. Lack of beard. Lack of undercoat. Short coat.

LONG-HAIRED DACHSHUND :
Coat of equal length all over body. Wavy or shaggy coat. Lack of flag (tail). Lack of overhanging feathering on ears. Short coat. Pronounced parting in coat on back. Hair too long between toes.

ELIMINATING FAULTS :
Aggressive or overly shy. Any dog clearly showing physical or behavioural abnormalities
shall be disqualified Overshot or undershot mouth, wry mouth. Faulty position of the lower canines. Absence of one or more canines; absence of one or more incisors. Lack of other premolars or molars. Exceptions : The two PM1, one PM2 without consideration of M3, as mentioned under Faults. Chest : Sternum cut off. Any fault of tail. Very loose shoulders. Knuckling over in pasterns. Black colour without markings (Brand); white colour with or
without markings (Brand). Colours other than those listed under “Colour”.

N.B:
Male animals should have two apparently normal testicles fully descended into the scrotum. Only functionally and clinically healthy dogs, with breed typical conformation, should be used for breeding. The latest amendments are in bold characters.